The good news is that pretty much anyone can use an acne patch. “Who out there doesn’t get a blemish here and there,” asks dermatologist Elliot Weiss of Laser & Skin Surgery Center of New York. “Who doesn’t get stressed and break out?” But not all breakouts are created equal, so how effective an acne patch may be depends on a few factors.

Acne patches tend to work best on pimples that have already come to a (white)head—like the ones you would probably try to pop on your own in the mirror. “If you put one on before the pimple has popped and gotten infected by more bacteria, it will make the skin heal faster,” says Rabach. Think of these as wet pimples, echos Dr. Dhingra, because the fluid inside the zit is already almost ready to come out—the patch just helps that process along.

If you are prone to dry or sensitive skin, acne patches could be a good alternative to traditional spot treatments like benzoyl peroxide or salicylic acid. “Higher strength benzoyl peroxides, for instance, might dry out the pimple, but then the surrounding skin gets flaky and irritated,” says Dr. Rabach, “whereas these patches don’t usually cause any additional inflammation.” While some of the newer patches do contain some of these traditional ingredients, they’re still likely in a lower, “metered” dose than the classic spot treatment, which are tempting to overdo and can lead to more irritation, says Dr. Weiss.

The Band-Aid like protection of acne patches also makes them ideal if you are prone to picking, popping, or taking matters into your own hands. “I tell people to not pick or pop their pimples, but I’m realistic—I know people do it,” says Dr. Dhingra. “Putting on an acne patch right after a pimple has been popped is successful because it absorbs whatever is still draining. It’s not like after you pop a pimple, the wound closes immediately.” Using an acne patch right on top of a freshly-popped pimple will help it heal quicker and with less risk of scarring, as well as lower the possibility of it getting infected. 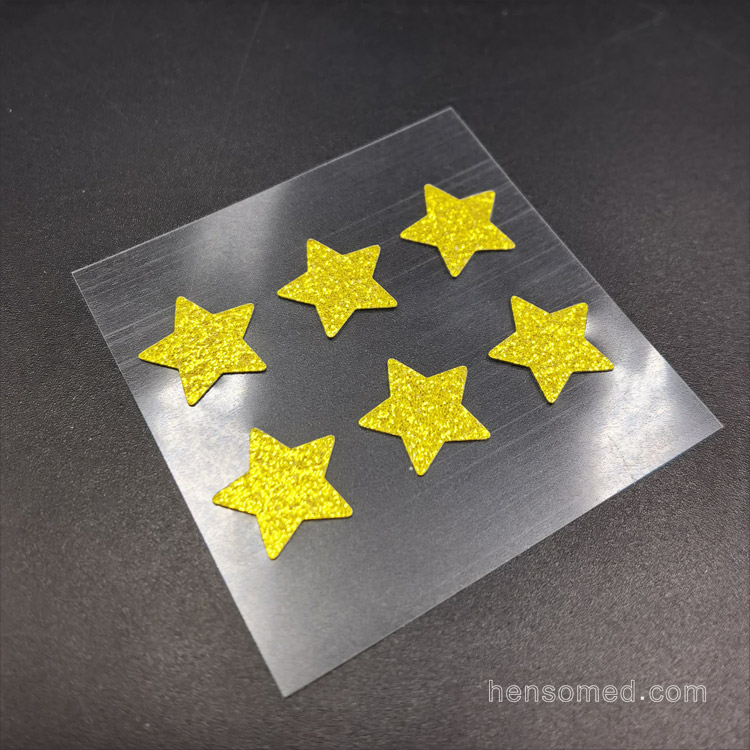 Useful knowledge about hydrocolloid Dressings By Nancy Morgan, RN, BSN, MBA, WOC, WCC, DWC, OMS Each month, Apple Bites brings you a tool you can apply in your daily practice. Description A hydrocolloid dressing is a wafer type of dressing that contains gel-forming agents in an adhesive compound laminated onto a... read more

What is the Difference Between N95 and KN95

KN95 Respirator Disposable Protective Face Mask (2) KN95 Respirator Disposable Protective Face Mask (3)In summary, different countries use different codes and numbers to name their respiratory face mask. They are all very similar. Please use the table below to compare, in summary, they are almost... read more

How To Use An Acne Patch ？

How To Use An Acne Patch ？   Using an acne patch has a set-it-and-forget-it quality, but to really get the most out of using one, you should always apply it to a clean face. Wash your face first to remove all excess oil and dirt and... read more

IS SILICONE SHEETING OR GEL BETTER FOR SCARS

IS SILICONE SHEETING OR GEL BETTER FOR SCARS? Topical silicone products represent a safe and effective treatment option for healing scars. Two of the most popular formulations are topical silicone gel and silicone gel sheeting. Both have been studied in numerous clinical evaluations that have... read more

History and Meaning of Vacutainer

History and meaning of Vacutainer Vacutainer is a registered brand of test tube specifically designed for venipuncture. It was developed in 1947 by Joseph Kleiner, and is currently marketed by Becton, Dickinson and company. Nowdays, people are accustomed to use ‘vacutainer’ or ‘vacutainer tubes‘ which means... read more

It is Time to Use KN95 Mask

KN95 Mask Face Protective Mask (1) N95 vs. KN95 Mask Due to the shortage of N95 masks, we have to consider using equally effective alternate options. N95 is a certification issued by US authorities. Masks that have equally effective properties as N95 masks go by different... read more

HOW DO ACNE PATCHES WORK

HOW DO HYDROCOLLOID BANDAGES AND ACNE PATCHES WORK? An ugly pimple crops up on your face and you have an interview the next day? You could put a little tea tree oil or benzoyl peroxide on it, but the spot treatment of the moment are acne patches. Long... read more

A Viral Transport Medium (VTM) following the WHO and CDC recommendations with or without swab.   The success of the diagnosis of SARS-CoV-2 (2019-nCoV) during the COVID-19 outbreak depends largely on the quality of the specimen and the conditions under which the specimen is transported and stored... read more